Imagine a world where the REAL Paul McCartney didn’t die in a car crash in 1966. Rather, as the band played on with Billy Shears, Paul, un-aged and without explanation, reemerges somewhere in Texas 30 years later. Adopting a quizzical snear and carney-esque guise, our metaphorical little friend spends the better part of two decades bouncing around various corners of the globe with a troupe of misfit minstrels, orchestrating the soundtrack to the lives of a cult of Autumn vegetable enthusiasts. While doing so, he develops a voracious appetite for all American culture has to offer. His consumption of facts and details, useless and meaningful, is only matched by his abilities to hum a tune and tell a story. Years later, he emerges from a pig barn in Montana with a new musical companion and a Manifesto to offer unto the world.

This is not to say that this story is true anymore that it can be confirmed that Jim Morrison is alive and well in a little town in Southern Oregon, or that Elvis stadium blitzed a Houston Oilers game or two in the late 1980s. But, allow yourself to ponder it for just a moment…

Nobody cares about your rough patch. Nobody’s buyin’ from your small batch.

Smith/McKay All Day is a genre-defying two-man band from Missoula, MT. They may look and sometimes act the part, but they’re not your eccentric cousin and his buddy plunking away on instruments next to the shed while frying pork chops on the hot plate nestled between them. No, sir. These guys are bonafide.

Jimmy Smith (Vocals, bass & drums) made his bones co-fronting The Gourds, a whimsical Austin based Americana act. Logging hundreds of shows and hundreds of thousands of miles, The Gourds built an absolutely rabid underground following across the US and Europe. Their work earned the band a reputation as one of the funnest live acts on the planet, and helped to inspire a new wave of alt Country & twang bands.

Smoking twisteds, grab my beater from the sack.

While Jimmy was cutting his teeth in Austin, Pat McKay (Guitar & vocals) was cutting heads from Texas to Montana, where he’s become an institution in his own right. Over the past twenty odd years, Pat has been the very definition of a blues journeyman, playing countless sets and sharing the stage with some of the most well known acts in the business.

Once Jimmy moved to Missoula, these two were bound to collide. Which brings us to “On the Smile Side”…

If you’re listenin’ to me then you’ll know the reason why we don’t touch twice.

For those not already in the know, Smith is a bit of a mad musical genius, and SMAD’s debut drives this notion home. Jimmy knows his way around a pop song, but, like the aforementioned REAL Paul, there is no time for any straight forward head bobbing. These are rich, complex musical compositions that modulate and change direction just before the listener has a chance to get comfortable, only to be pulled back around and in with a well placed, yet indelicate hook. How did we get here from there? Fuck if I know, but giddy up.

Like eggs in your meatloaf, it’s a gray matter binder.

Lyrically, these songs play out like fragmented moments spanning the lifetime of Generation X spun together into something sheerly nonsensical. Like any great artist, SMAD is neither too cool, nor proud to borrow and re-use. Listening to “On the Smile Side” is a bit like reliving the days when you surfed through all 36 channels of basic cable, 3-seconds-a-stop, before finally landing on The Breakfast Club or Point Break or 120 Minutes or some old sci-fi flick – except Jimmy’s holding the remote. He’s got that look in his eye and there ain’t no tellin’ how this nights gonna end. Ever seen Wonka?

There’s no doubt about it, SMAD is fun, and “On the Smile Side” is aptly named. Laugh all you want, but a deeper listen reveals an intellectual side that you wouldn’t likely presume of a junkyard duo. One can appreciate their strangeness and humor, but easily miss the clever word twists and vague allusions. These guys are wicked smart, but they don’t really care if you catch on or not. If you snooze, you lose, but if you get it, a nod is as good as a wink.

Rollin’ in my lunch lady’s arms, she’s the gatekeeper.

It’s true. “On The Smile Side” was recorded in an actual pig barn, not Apple Studios. It’s lo-fi and DIY, but Jimmy and Pat play the Hell out of these songs. There’s a bucket full of blood and guts and spit and sweat in this record. It is raw, and it is genuinely these two men… draped in the mad king’s hand-me-downs scrawling sonnets on an old pizza box with a Sharpie. Go to the G-sharp minor there, then back to the 4… and dibs on that piece of bacon after the bridge.

Hhhmm, maybe they are your eccentric cousin and his pal cooking pork chops outside the barn. Wait, how do the live pigs feel about this? Oh dear, can somebody please grab me a Rainier?

Whether you’re reading this as a club promoter, a music writer or a fan, you’ve stumbled upon a good time with SMAD. “On The Smile Side”, like their live performances, will make you smile and laugh. It will make you think. Mostly, though, it will make your shoulders shimmy and ass shake as you involuntarily sing along with the nonsense – sometimes in the wee hours of the morning. Earworm gonna getcha …. getcha… 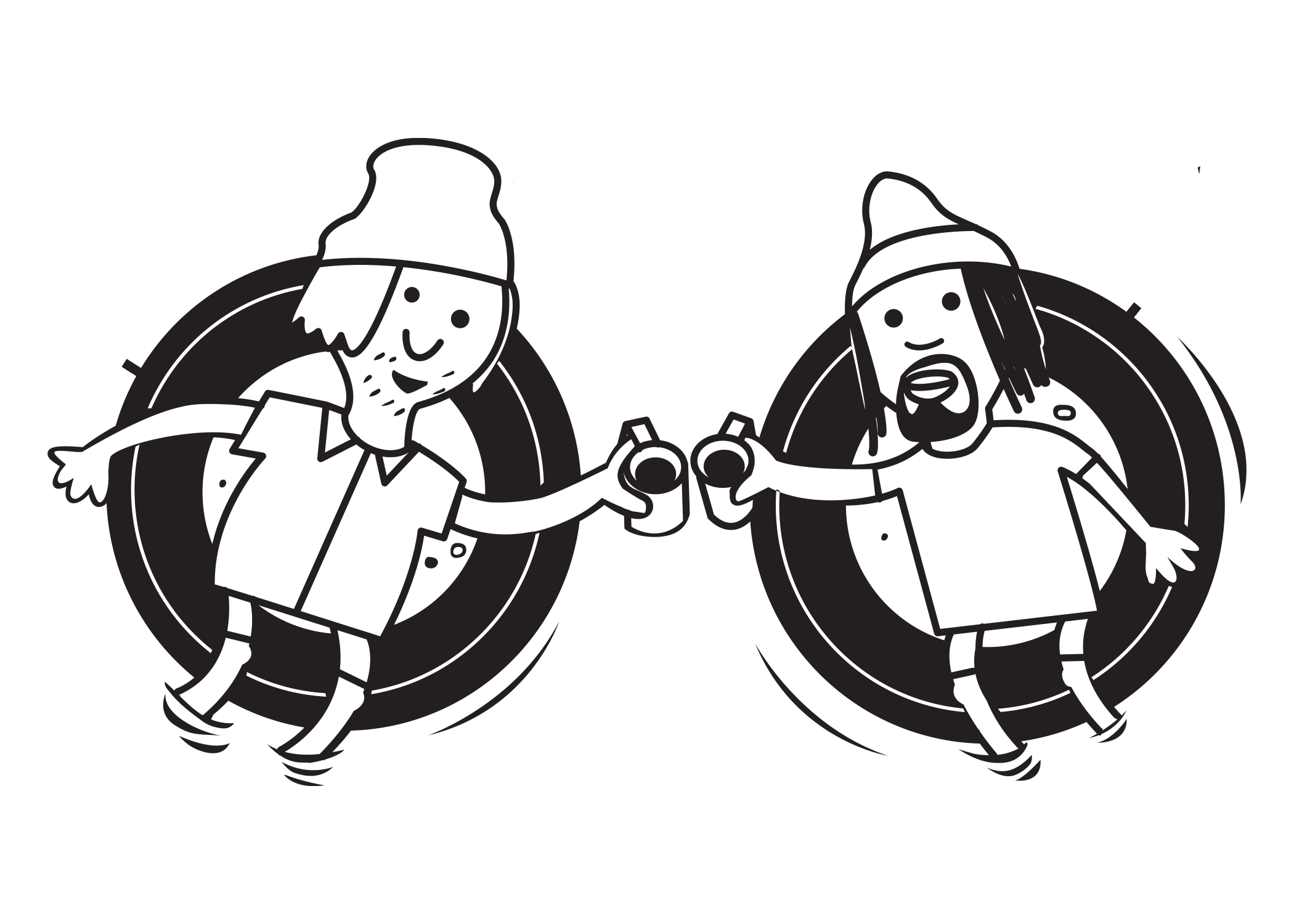 photography and videography by Kolja Gerstenkorn